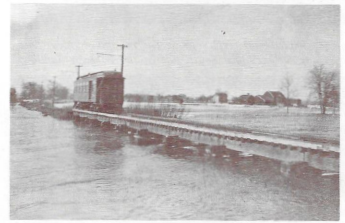 The Kalamazoo County interurban helped connect residents with cities like Battle Creek, Grand Rapids, Augusta and Galesburg. This electric train was an important means of transportation before cars become more common.
According to the Comstock Bicentennial Commemorative Book, the interurban and the Buffalo Bill Wild West show arrived in Kalamazoo on August 3, 1900. More than 1,000 people rode the train.
The train cars were typically orange or dark green and had a coal heater in the front.

The interurban waiting at the “Fry Stop” on modern day Comstock Ave. Picture taken in 1913 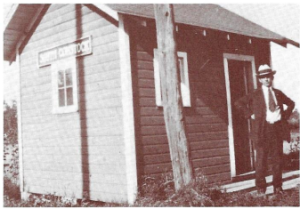 South Comstock interurban station. The man is believed to be a Mr. Jackson, Sr. 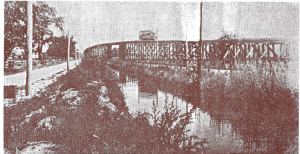 A interurban car drives by a “typical rural scene of the period.” Location unkown. 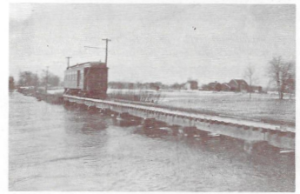 Interurban driving over a bridge during the flood of 1908.

There were 3 separate lines. One ran straight between Kalamazoo and Grand Rapids. Another stopped stopped along the main cities between Kalamazoo and Grand Rapids. The third, stopped everywhere.
According to the Comstock Bicentennial Commemorative Book, one of the most feared curves along the interurban was on River Street. It was a 90 degree turn to run parallel to the Michigan Central Railroad track.
Interurban services ended in Kalamazoo County in 1929.
Back to top