Comstock Township was first surveyed by Robert N. Clark, Jr. in 1827. It was settled two years later by William Tolland, who left Ypsilanti in September or August of 1827.

William “took 18 acres,” and sowed wheat on them. Sometime after that he built a log cabin. He left Comstock in the winter and returned in 1828 with his family.

In 1830 Horace Comstock, Caleb Eldred, and Sam Percival settled around Comstock Creek. They began to build up the village, creating the first sawmill and grist mill in the area.

Comstock was official organized into a Township in 1834. William Earl was elected as the first Supervisor, Leland Lane was the first Clerk, and Samuel Percival was the first Treasurer.

Horace Comstock donated land and built a school building in return for the Township being named after him. He was probably much wealthier than other residents. According to an 1838 assessment roll, Horace paid $16,000 in taxes at a time when many of his peers paid only $15. 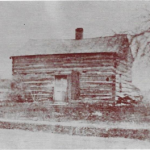 A log cabin that was owned by Fanny Loch on River Street. 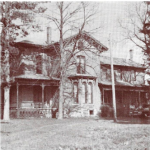 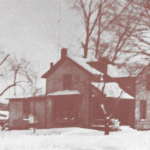 The Fry House. The house is believed to have been built before 1850. 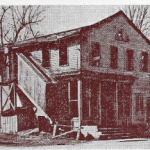 Wreckers tearing down a tavern. 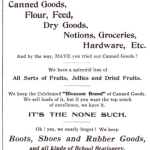 An advertisement for Baldwin’s general store.