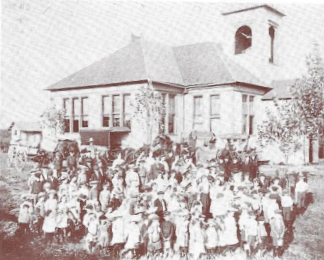 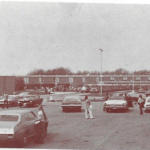 School buses in at a Comstock Township High School. 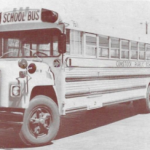 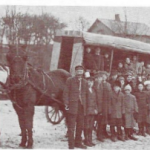 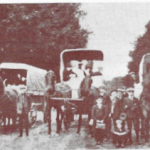 The three transportation wagons of Comstock Township in 1906. 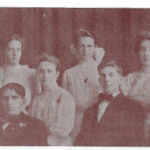 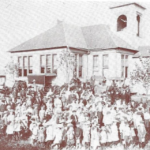 Students outside of a Comstock Township school in 1906. You can see the transportation wagons in the background.

The first school in the community was taught by Betsey Comings in 1831.
Classes were held in a shanty originally built as a house.
She had 6 students and was paid $1 for her work.
Another school near Galesburg had 12 students and was housed in a log cabin in 1834.
Back in the day, school was held anywhere from 3 to 7 months depending on the treasury.
Communities did create public schools. In the southwest corner of Comstock Township, pioneers created a public school called District 9. They raised $150 to build the building and $18 to buy the site.
Comstock Village’s second school was built with 2 rooms and a heater. The first official fire drill was held there, which may have helped all 70 students get out safely when the school burned down.
Back to top